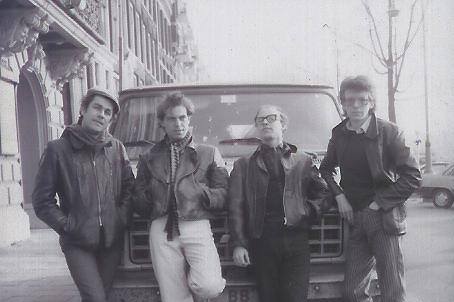 JP & Private Life was the name of a loose bunch of excellent musicians, that in the early eighties gathered around singer/songwriter JP Den Tex.  Roughly every two years they recorded an album and usually did a small tour after the release to promote it. The core of this incidental band was formed by bass player Jaap van der Sluijs (he played on all four albums) and Oh Boy guitarist Michiel Jansen (he played on three), the same goes for saxophonist Tom Barlage and keyboard player Willem Ennes, both from progrock group Solution. Wild Romance drummer Cees Meerman sang and played drums on “Heartbeat” (1980), Solution drummer Hans Waterman handled the sticks on “Playtime” (1981) and “Clever Fool” (1983) and Christan Muiser did the same on “So Low” (1984). All four albums were recorded at the – then hip – Spitsbergen Studio in the northeasternmost tip of the Netherlands, which gives the sound on the albums a steady similar feel underneath the varying musical crews. In spite of initial critical acclaim the “Private Life” project would lack commercial success. In the summer of 1985 JP gave up on it, although the tracks “So Low” and “Fully Qualified Survivor”(from the fourth album) had gotten ample media attention on Dutch radio and tv. Recently fresh new interest in the albums has sprung up: Red Bullet – the owner of most of the copyrights – has remastered and digitalised the albums and is now putting them on the streaming services.