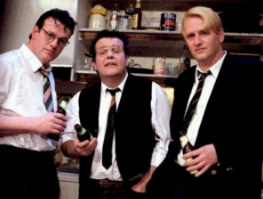 We started a new documentary series on Facebook, ‘Tomorrow Never Knows’. Every Thursday a new episode. Here’s a little prelude:

“In 2000 our record company Bedrock arranged for the making of a special DJ remix to the catchy tune ‘Maddalena’, one of the most popular tracks on our ‘Hotel Yankee Tango’ album. The Americana sound of the original song was tweaked into a slightly more ‘commercial product’, which at the time raised a few eyebrows among my band members. Part of the plan was a videoclip with the famous Jiskefet threesome (Kees Prins. Michiel Romeyn & Herman Koch), the Dutch equivalent of Monty Python. Actor Michiel Romeyn directed the clip. For this occasion I bought an expensive Armani T-shirt, which made me look a bit lost in the overall party mood, especially without my musical buddies by my side. But there’s some nice footage in the clip, after all these years it’s still fun to watch!”